What are the Causes of Obesity?

Obesity can be caused by a variety of different factors. The reasons are multilayered and contrary to mainstream beliefs, obesity is not simply a direct result of overeating. Research has demonstrated that in many cases of morbid obesity, the causes are in fact, genetic. According to studies which have been carried out on the subject, once the condition has developed, diet and exercise programs yield little in the way of results. Morbid obesity has proven difficult to treat successfully with diet and exercise alone. Many medical organizations now refer to Obesity and a "disease." This model of thought recognizes the biological, psychological and social components which make this problem such a struggle for so many.

Research on the subject is ongoing and until obesity is more clearly understood within the scientific community, researchers will be continuously searching for answers while those suffering from obesity will have challenges with weight control for their entire lives. For this reason, it is imperative to fully comprehend that the medical interventions currently available including weight loss surgery, should not be thought of as medical cures. Instead, they are attempts to reduce the symptoms and better manage excess weight as well as reducing the accompanying emotional, physical, and social repercussions of the disorder. Weight loss surgery is best thought of as a powerful tool to help someone suffering with obesity take the first steps to recovery.

The factors that contribute to obesity are multifaceted and include hereditary, metabolic, genetic, environmental, psychological and eating disorders.

A plethora of scientific studies have indicated that genes play an integral role in determining your propensity for gaining weight.

The data from these studies indicates that we most likely have quite a number of genes that predispose us to a certain weight. Similarly to how other genes determine our eye color, hair color, or height, some genes may affect our appetites, ability to feel satiated after a meal, our metabolism, fat storing abilities, and even our levels of activity.

The Pima Paradox – The Case for Genetics + Environment

In scientific groups, the Pima Indians are well known to be one of the heaviest groups of people worldwide. Researchers from the National Institutes of Health have been studying them for over 35 years in an effort to gain a better understanding of the causes. Some adults weigh in excess of 500 pounds and some of the teenagers suffer from diabetes which is the disorder that is often present in cases of obesity.

However here is a very interesting fact - There is a group of Pima Indians who live in Sierra Madre, Mexico who do not have a problem with obesity or the diseases associated with it. Why not?

The theory that has the most popularity is that after several generations of living in the desert and facing survival challenges such as famine. The Pima Indians who survived were those with an increased capability of storing fat, however those genes work against them today.

It is clear that the Pima have a genetic tendency for excessive weight gain and the environment in which they and most of us live, make it almost impossible to maintain a normal, healthy weight. Long hours at a desk, fast food, and the convenience of using cars as a primary means of transport make it difficult to manage weight when considering an existing genetic predisposition.

Weight gain and loss used to only be considered in terms of the amount of calories ingested and then burned. The theory was that if you burn more calories than you ingest, weight loss ensues. However now we understand that in actuality, that concept is not all there is to weight loss. Obesity researchers are now discussing a theory that they term as the “set point.” This is considered as a type of thermostat in the brain that makes people resistant to either weight loss or weight gain. The theory states that if you attempt to lower your caloric intake in an effort to lose weight, the brain will respond by lowering your metabolism to compensate for the reduction in calories. The result is that you gain back any weight you may have lost.

Eating disorders cannot be cured with weight loss surgery. There are medical conditions which are proven to cause weight gain such as hyperthyroidism. For this reason it is important to work alongside your primary care doctor to ensure you do not have a medical condition which requires treatment with counseling and medication. 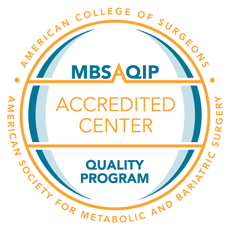 A Bariatric Center of Excellence

*Disclaimer: All weight loss claims are due to surgery. Results will vary by person and are based upon the patient, the surgery type and the compliance with the aftercare program.